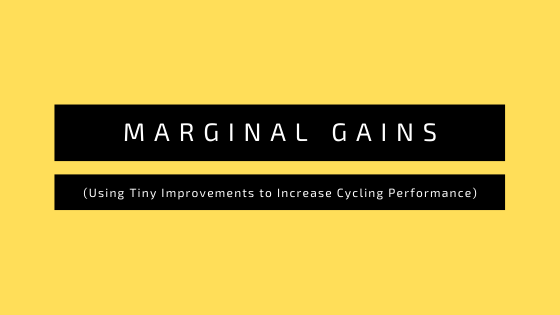 Dave Brailsford introduced us to a new way of thinking when he entered the cycling scene with Team Sky and the principle of ‘marginal gains.’ The British cycling coach and manager has won seven out of the last eight editions of Tour de France. Difficult not to consider if there is something we can learn from him.

I believe it is a philosophy that you can easily use to achieve better results. In this blog post, I will try to explain how you can implement and use marginal gains to your advantage.

What is the marginal gains theory?

The beauty of adding small incremental improvements in any process so they can make a significant improvement when they are all added together.

When race cyclists, cycling coaches, and cycling experts evaluate cycling races, there is a strong tendency to look straight at the top of the podium.

There is a mantra called ‘the winner is always right.’

It is tempting to find inspiration from the best rider, and there is also a valid reason to pay attention: the winner crossed the line before everyone else. Brailford has had several victories on Champ.

However, ‘the winner is always right’ mentality may limit your creative process of developing improvements to your race performance.

It is clear that the 1st place probably did many things pretty well. It is the sum of all his training, race-specific preparation, nutritional strategy, tactical moves, and technical performance that made him cross the finish line before the peloton.

But if you split all the elements that are related to your race performance up in atoms, you will find places for improvements. Guaranteed.

From a scientific perspective, you will have to accept that many of these minor tweaks can not be proved statistically. Even if there is a gain, let’s say 0.5%, it is impossible to prove that there is an actual advantage, but the sum of all these small gains will, hopefully, make a competitive advantage.

First of all, you should focus long term – Rome wasn’t built in a day.

Looking for many marginal gains is a philosophy that will not make huge improvements in the short run.

There are normally no quick wins. It is no miracle cure.

Instead, this behavioral approach will secure you significant and incremental improvements in the long term.

And it should be an ongoing process. You will have to adapt to a routine where you always aim to make things better. As  you get started to implement small gains, they will begin to accumulate, and over time, you will give yourself a clear advantage.

Actually, I had such a challenge back in 2015 where I got the opportunity to coach Mads Würtz Schmidt who had won the U23 world championship just two months before. I guess this is probably the most difficult time you can ever begin a relationship with a new rider. Seriously, what can possibly be improved next season?

Though, it is no secret that coaching the world champion is a challenge, but not so easy task. All basic and advanced training advice are redundant and have been implemented for several years. Nearly all professional riders know and how to use solid principles for training, nutrition, and recovery.

Building on all the great principles used from previous seasons makes perfect sense when you wear the rainbow-colored jersey. Just imagine what people and the press expect from a rider who has just won the World championship. There are really no good reasons to make major changes. And lots of reasons to be blamed if the following season is no success.

So it is tempting to just hit the ‘repeat’ button and let him do the same over again.

In such a situation, it makes sense to consider the concept of marginal gains. Actually, very small changes are not as scary to implement as larger ones. If you make harmless small adjustments, who can say they have significant negative influence?

So I decided to look for tiny improvements that could help him improve further. And set a clear goal for the first season: a pro contract on the world tour.

Through my data analysis, it was clear that it was still possible to add more training volume and total workload, which is not surprising for a 21-year old rider. There is a logic, natural progress in training volume, training intensity, and total race volume for the most talented riders.

Even though you are among the best in your age group, you are not maxed out in training volume. Therefore, the most reasonable way to plan training is to make progress in training volume and add slightly more races (also more difficult races) to his calendar.

Secondly, there were all those small improvements that made sense from a theoretical point of view. These changes can be considered as ‘marginal gains.’

And also several small, technical changes in race setup that could have a positive influence on performance (bike fitting tweaks, ceramic bearings, etc.) Again, it is a question of finding meaningful improvements that you believe will give you an advantage.

It is clear that a 360-degree analysis of every single process associated with Tour de France makes sense when you are Dave Brailsford. And it makes sense when I coach a 21-year danish rider who has just recently won the U23 world championships.

But what is the take-home message for you? The marginal gains theory can be used at the amateur level as well, but it is very important to remember that all the basics should be implemented before you begin to look for marginal gains.

It sounds tempting (and quite easy), but please remember that everything else should be close to perfect (training volume, intensity, frequency, recovery, etc.)

If you think longer cycling socks will do the trick and make you MUCH faster, you will probably be disappointed using the marginal gains philosophy.

So get the basics right.

Then keep an eye for areas where you can add tiny improvements to your cycling performance. If you believe in what you do, there is also a better chance you will succeed.