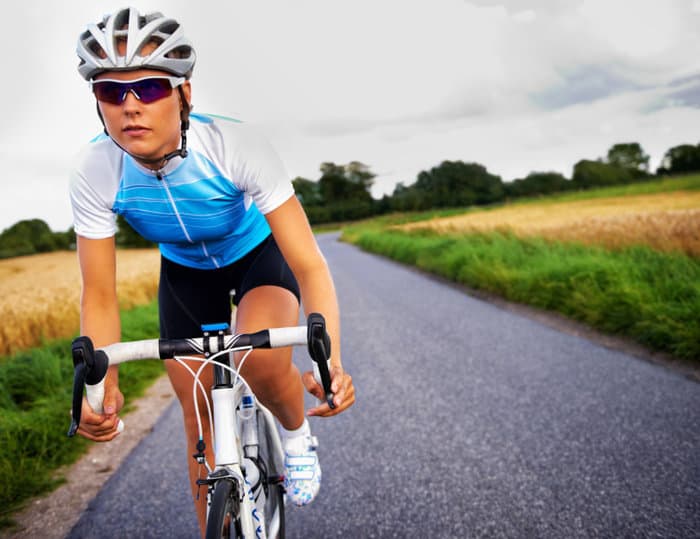 Women cyclists all have one common dilemma: we participate in a sport that’s dominated by men.

On race days we usually don’t have to worry about this because there’s a group of us gathered to compete (although I have been to races where they grouped the women with the men because there weren’t enough female racers to constitute a race).

However, training days are another story…

How To Get The Most Out Of Training With Men

Unless each of us female racers get 10 of our closest friends on bikes and interested in cycling, we’re going to have to get used to training and riding with the guys and learn to make the most out of it.

#1 Men are stronger than women, usually. Use this to your advantage.

Yes, there are men out there that I can ride off my wheel, but when it comes to pitting me, a Category 2 female, against a Category 2 male racer, there’s no competition. I’m lucky if I can stay on his wheel.

I have spent many of my training hours working hard to stay with three of my male training buddies.

Each of these guys has raced professionally at some point in their careers and are anything but slow. An “easy” ride for them will find me in high Zone 3, and that’s all right by me.

Riding with the guys has greatly improved my endurance and ability to keep on their wheels.

Having the mindset and the strength to “hang with anyone” has crossed over nicely when it comes to race day in the women’s peloton. I have found that I’m stronger than many of my competitors, and I’m able to reel back breakaways or confidently take a break of my own.

I know it’s combination of actually being stronger because I’ve been training with people who are stronger, and it’s having the mental toughness to not back down from a challenge.

#2 Make the most of race day: race more than one race.

This suggestion depends a little bit on your rapport with the race officials, but can usually work at smaller races.

Not every race is a world championship, nor should it be treated that way. We all have races on our calendars that we compete in but consider them to be more of training race than something we’ll put on our racing resumés.

Why not race in another field in addition to the women’s race?

Yes, it is more riding with men, but it will give you a chance to ride extremely hard and improve your riding skills.

I wouldn’t be in way when it came to the finish, but I would mix it up in the field and be part of the field when it surged. Doing this taught me a lot about what to expect for my first professional women’s road stage race.

This may sound like a novice tip, but it’s worth repeating again and again. There is a lot riding on your nether regions. An uncomfortable seam can take you off the bike for a week by way of a painful saddle sore. Untreated saddle sores can become infected and lead to vaginitis or bacterial vaginitis and even more time off the bike.

After you’ve found the most comfortable bike shorts available (keep in mind they could be a men’s short…my current favorite chamois are a men’s cut) buy several pairs. I always say five because I only ride six days a week and by the time I’m onto day six I’ve already done laundry.

Chamois time is NOT ride time.

In other words, being in your shorts for extra time post-ride doesn’t add to your training time.

As soon as you can, get out of your shorts. Sweaty, wet, warm cycling shorts are a breeding ground for bacteria. After a ride wash yourself as soon as possible and choose a pair of underpants (or none at all) that are moisture wicking.

Good ventilation is key after a ride. It gives your skin a chance to dry out and can prevent the festering of any friction related issues that may be developing.

Finally, don’t be intimidated when riding with the guys, they’re secretly stoked you’re there.

Cycling men are an interesting bunch. Even the guys who seem less than thrilled to see you hanging onto the peloton are probably impressed that you accepted the challenge to ride with them.

After a while, the guys will start to encourage you. I’ve ridden with a lot of men and one man I remember particularly well was one who’d always find himself next to me on a tough climb an would practically cheer for me saying “C’mon, Cece! Up-up!” as we pushed our way through the field.

Making little goals during the ride will encourage you to stay with the guys even when the pace is blistering. I used to not allow myself to be last up a climb. I also would force myself to contest every sprint, even if there was not even the slightest chance of me coming out ahead of the pack. The men appreciated my efforts and the hard work paid dividends for me.

With the men, we’re all on a quest to be the best on every ride. And, I believe, training at at levels much higher than your personal best will ultimately make you a much better rider.