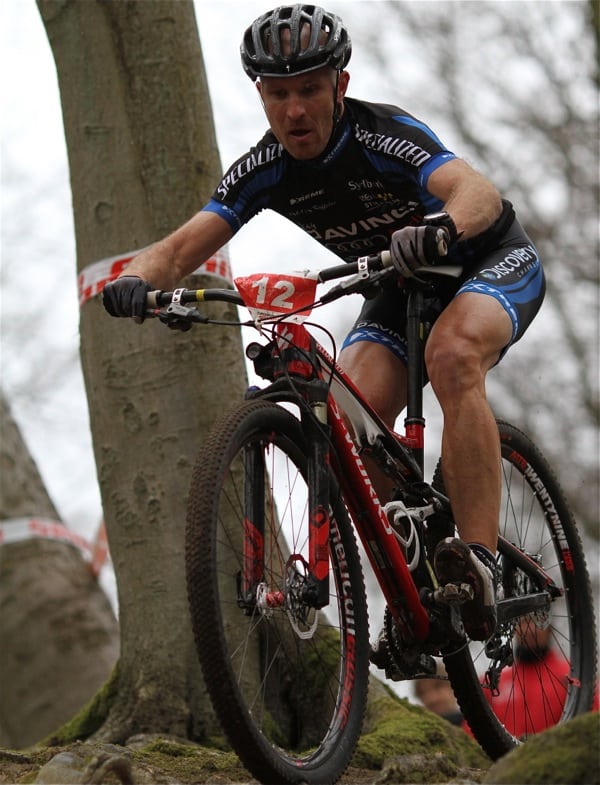 The final 10-second countdown always sums up the race for me. It doesn’t matter how long I’ve been retired from professional cycling. When I’m behind that starting line–whether it’s at a local 5KM run or the start of a fun bike race, those last 10 seconds before the starter’s gun shatters the silence are when it all comes together for me.

Before any race day there’s a lot going on both mentally and emotionally that’s far beyond than the normal routine of getting ready for another training ride. I’ve ridden that emotional and mental roller coaster somewhere north of 200 races during the course of my career, and the thought stream that kept me most grounded was constantly reminding myself whose race it was to win.

Mountain bike racing is just as much about being physically prepared as it is to have your brain conditioned and ready on race day. You can do as many VO2 Max intervals as physically possible and ride at your Lactic Acid Threshold all day long, but if the stuff between your ears isn’t also in training for the big day, it will be like showing up to the starting line with a flat tire.

My number one tip for mountain bike race day: Don’t forget to train your brain.

Over the years I’ve been on training rides with people who can absolutely school me. They out pace me on the flats, drop me on the climbs, and are waiting for me at the bottom of a decent sipping on a water bottle and looking bored. Yet, on race day I would easily ace them.

Why? Because along with chasing their rears on our training rides, I also was spending time conditioning my mind.

Training your brain starts with the little things. For example, every time my training schedule included a mock time trial, I’d set the “finish line” as a landmark in a somewhat visible place like the city limits sign coming into a busy town. When I crossed that line, after keeping it in mind while pushing hard for the entire time, I always threw my arms up in the air and smile and would shout like I was finishing a stage in the Tour de France. People would look at me like I was crazy, but I knew I was the winner of the Tuesday night time trial world championships. (That probably sounds silly, but I always felt like I was beaming with joy inside after the effort, and I know for me it’s made the difference between first and second places many times.)

Combining my physical strength with the power of positive self-talk – encouraging myself with each pedal stroke carrying me toward the city limit sign – and then rewarding my efforts by throwing my arms up in the air, created sort of a Pavlovian response of physical exertion needing to result in a triumphant victorious feeling.

I knew of others who were positive when they were training, but then on the race course they’d fall apart. It would start with the negative banter during warm-up before the race. My competitors would say things like, “Awe, I haven’t really been training that much and I’m not ready for this,” or “I hope I don’t get a flat tire again today.” They’d be in the starting area with uncertain looks on their faces and fear in their eyes as they gazed out at all the spectators. Before the gun even went off, those competitors were racing for fourth place.

Long before you pack up your race day bag, put your bike in the car, and drive to the race, you need to telling yourself that this is your race. When you roll up to the starting line, this is your race. It doesn’t belong to the person leading the series or the person who came in ahead of you at the last race. This is your race and you are going to throw your arms up at the end and bask in your victory just like did on your training rides.

My other mental secret weapon for race day: Ride the course in your head.

I know it’s not always possible, but pre-riding the course if possible will always help on race day. This recommendation goes beyond the obvious reasons of knowing the most efficient lines and being prepared for all of the terrain and obstacles. This, again, is all about your head.

Every time I’ve done a race–mountain or road–on the night before between the time my head hit the pillow and I fell asleep, I rode the course again in my head. (I have friends who now use their GoPro cameras and record the course and then watch it like a movie before going to sleep every night.) Sometimes I would lay on my back with my arms stretched out in front of me pretending my hands were on the bars. As I rode the course through my mind, I’d use the brakes, shift, and remember particular rocks and roots and the best lines I took to clear them. This technique gave me confidence on a course even though I hadn’t spent much time actually riding it.

Putting it all together during the 10 second countdown before the start.

Those last ten seconds were always the most peaceful 10 seconds of my entire day. The world seemed to move in slow motion, and the only thing I could hear was my heart beating in my ears.

This is the 10 seconds when your mind flashes forward. As the clock clicks down, you’re seeing yourself with your mind’s eye flying through the sections of trail you know you’re strong on. You’re remembering that one rock or root that you need to clear to clean a section. You’re also seeing your self crossing the finish line with your arms over head and the crowd cheering in the background. The pop of the starter’s pistol is what ends this positive visualization, and it is what starts you on the course to the best race of your life.