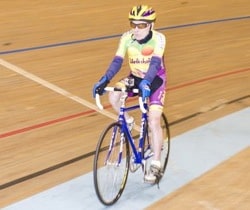 Just a motivating reminder to all readers of this blog who are under 100 years old:

Frenchman Robert Marchand entered the cycling record books in the one-hour event on Friday 17th of February 2012, three months after celebrating his 100th birthday. Marchand rode impressive 24.251 kilometers around an indoor track to establish the first-ever hour performance in the 100-years-plus category.

Who will be the next rider to break this impressive record?

I have only one word for this: Respect!

As I have said before: Getting older – it happens to us all.

Most people are content to pick up their pipe and slippers and enjoy a more relaxing, sedentary lifestyle in their twilight years. Pottering about in the garden might be the total of their exercise regime. But if you are passionate about sport, keeping fit, and challenging yourself to greater heights, then hitting the age of 50 is probably the perfect time to set yourself a new goal.

And this sweet story about Marchand emphasizes that everything is possible.

“I could have gone faster, but I didn’t want to,” Marchand, who his cardiologist in France gave clearance before making an attempt, told reporters at the International Cycling Union UCI track in Aigle, where he spent a week preparing.

“I’m not playing at being a champion,” he said. “I just wanted to do something for my 100th birthday.”

The UCI had already said it would recognize the record, meaning that Marchand had to undergo a doping test after completing the event.

So for the majority of the readers here on Training4cyclists.com, there is now a new long-term goal for your training.