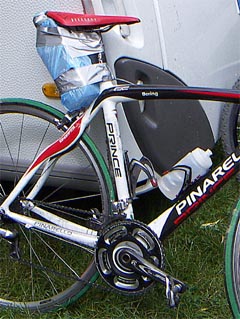 Ever wondered how much difference it would make if you made your bike lighter? I guess most serious riders once in a while have concerns about their bikes whether they are light enough. As previously described, bike weight impacts performance, especially during climbing.

Thus, I thought it was interesting to determine how much difference it makes if you ride a heavier bike up Alpe d’Huez. The best rider I coach performed this little trial as a part of his preparation for Tour de l’avenir (U23 Tour de France) in September 2008.

In this experiment, he had to ride up Alpe d’Huez four times with different setups. He was supposed to keep a pace around 275w on all four rides. The test bike was a Pinarello Prince equipped with Shimano Dura-Ace and SRM crank:

1. Normal bike + 1.8L extra water in tires (!)
This setup was quite exciting and got quite a lot of attention the day before when he had a puncture..! It was possible to fill 900ml into each tire. Reducing weights on wheels is more important than lowering the weight on non-rolling equipment, e.g., bike saddle.

2. Normal bike + 1,8L extra water on the bike.
This setup also got some serious attention because he rode relatively fast compared to most riders visiting Alpe d’Huez. Thus, when he performed the trial, well-trained riders tried to keep up with his pace because this setup looked so extreme.

3. Normal bike
This setup was an utterly normal bike.

1,8L extra weight costs 1.54min up Alpe d’Huez. Also, these trials show that weight savings on wheels might be more critical than weight saving on non-rolling equipment. These trials were only possible because of his SRM Crank that made it possible to compare each ride up the hill. You can make similar trials to test your bike setup to optimize your bike equipment. These tests can be beneficial, for example, time trialists if you don’t have a wind tunnel in the neighbourhood.