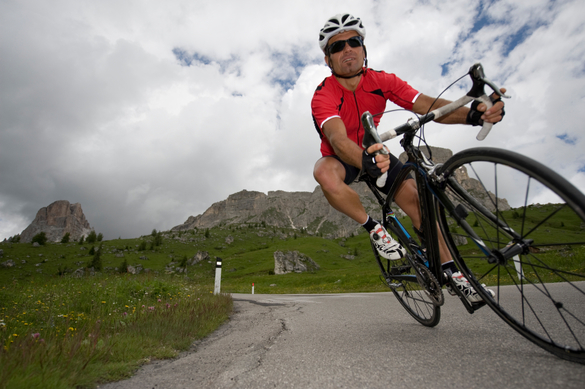 The road cycling race season is just about to begin and in some countries they have already started. Today I will show you some highly effective techniques that will help you to perform better from the very first race.

One of the most common arguments against interval training during the winter is the risk of peaking too early.

I disagree. If you are not competing at a professional level, your risk of peaking too early is extremely low. Remember that your current fitness leaves significant room for improvement and thatâ€™s why it makes sense to train longer, faster and more frequently. You are far from peaking.

Finishing a solid base training leaves you with a strong aerobic engine. Your threshold power is now close to maximum and you are getting lean and ready to enter the cycling races. Still, you might have the feeling that your legs are not ready for the big races.

There is something missing…

Have you ever completed a solid base training left with the feeling that you still lack race speed to perform optimally? Have you (or some of your cycling buddies) ever used â€˜lack of race speedâ€™ as an excuse for not performing as well as you were hoping for?

The case is that a solid aerobic engine alone is not enough to win cycling races.

Even though threshold power is often referred as the single most important physiological parameter, having a decent power output at threshold power is not enough. Most often you will need both anaerobic endurance/sprint skills and also a highly trained VO2 max to be competitive in cycling races.

Why? Because in most cycling races winds play an important role. When you ride behind other riders in the bunch you may save up to 40% of power output to maintain the pace.

Thus, if you just sit in the front of the peloton and work around your threshold power, all other riders can easily follow your pace as long as you ride in the flat or slightly uphills.

So if you want to make a breakaway or drop some of your worst opponents then a steady pace at threshold power might not be enough.

Instead, you need to use your anaerobic and tactical skills to establish a breakaway.

And then afterwards return to a steady pace slightly below threshold power in your new group of riders.

To be able to make these breakaways youâ€™ll need to have at least some anaerobic power to accelerate away from the peloton. Itâ€™s clear that the more aware your opponents are, the harder you will have to work to get away. Also, as you get closer to the finish line you should expect more riders to react when you make your attempts.

You could see their awareness as a problem or you can see it as your opportunity to strategical alternatives. By leveraging from other riders impatience, you can actually make tactical moves that are far more likely to succeed than with most solo attacks. Also if you stay away from the front and simply let the attacking rider protect you from the wind, you can relatively easy join the attack. That way you have a chance to join a new breakaway while saving your anaerobic power for later.

Structure is the key to successful cycling training

Even experienced and ambitious riders get surprised when they enter the first couple of races in the season. Some of them may have increased their total training load significantly during the winter and therefore – reasonable – expect to perform better.

However, many of these talented riders donâ€™t get the results and honour they have worked so hard for. Because they struggle so hard to increase the total training time and intervals, they forget to remind themselves of the importance of having a good overall structure on their training plans.

If there is no structure on your intervals, distance training and cycling races then all else is meaningless. Forget about exotic recovery drinks, aero wheels, carbon saddles etc.

If there is no structure on when you train hard and when you donâ€™t then this is the first place to improve your performance in the long run.

Simply put: structure is the best and most effective way to increase your performance. And you donâ€™t have train harder.

It takes more time to build a solid aerobic engine, but once it is built it will remain at a reasonable level with the minimum of training.

Why are the first cycling races in the season so difficult?

One of the most common excuses is â€˜lack of race speedâ€™. I agree with this cause, but I donâ€™t think itâ€™s very precise.

Switching from group rides at 30km/hr to cycling races at 40+ km/hr is not only a question of speed. Itâ€™s a paradigm shift from riding friendly group rides to entering a war on bikes.

Let me explain: If you havenâ€™t included high intensity intervals and riding in your training yet, you will very likely experience â€˜lack of race speedâ€™. And you will experience it the hard way. To make it clear: If you are not prepared, you will be punished.

Those riders who dominate and win these first races are typically well prepared.

They have followed their training programs for months and they have been doing some kind of high intensity (anaerobic) training in the past. And that gives them what is commonly referred as â€˜race speedâ€™.

So yes, in races you ride 10km/hr faster, but that is only a part of the explanation. The physiological and technical demands are quite different when you enter a cycling race.

Though, the good news for lazy riders: If you havenâ€™t done your anaerobic training, you will catch up within 6 to 8 weeks. Thatâ€™s what many cyclists experience season after season when they have entered the first ten races or so.

Simply, because their anaerobic capacity gets a boost from participating in the cycling races.

That also means, that if you plan to peak later in the season, you donâ€™t have to push too hard with anaerobic intervals and sprints before the season opens. But it will make your life in the peloton a bit easier and maybe your winning chances are also better in early part of the season.

1) Friendly races (Fartlek)â€¨
Making your training more similar to races is a logic step that helps you prepare for the cycling races waiting for you.

Instead of riding steady pace group rides, you should include two or three short races with a predefined distance of 5km or up. These friendly races give you a nice combination of aerobic and anaerobic intervals while riding your bike at higher speeds. You will also get a sense of race tactics if you include a finish line for your friendly race.

Though, this training approach is an unorganized way to train compared to most of the other advice I give, itâ€™s a very effective and inspiring way to optimize your aerobic and anaerobic systems. Well performed, these Fartlek sessions are both highly effective and motivating as pre-season workouts.

Sometimes you simply have to dig a little deeper into your reserves when you train. This may help you to go from good to great. But, more importantly, it is a great mental relief to just follow the pack as they begin to race.

So remember the positive attitude and enjoy the chance to have some extra training and fun at the same time.

If you never do anything that is not scheduled in the training plan, then do at least one off-diary interval/race/sprint this week.

Even without any pacing tool, it is relatively easy to get a great boost of your anaerobic power and endurance.

Simply by doing anaerobic intervals once or twice per week, your anaerobic capacity will increase significantly within a few weeks. It is much faster than building aerobic power, so even if you are a bit late, you have a good chance to catch up quickly.

One important thing that most riders are not aware of is the need for recovery between hard anaerobic intervals.

Why? If your recovery periods are too short, you will not be able to generate sufficient high power outputs in the work periods and more work will be performed through aerobic metabolism. Thus, you will not get a sufficient stimulus for your anaerobic enzymes.

3) Taperingâ€¨
The most overlooked secret of winning riders is their use of tapering. If you want to make a really great ride, you should make at least some kind of tapering protocol before the races you prioritize. That will make your legs and mind fresh, and help you to perform much better than most of your opponents.

Especially in the early part of the season many riders have been through a heavy amount of training. With reference to the overload principle, these riders need a few weeks of tapering before they are able to perform at peak performance.

Itâ€™s not all about boosting your anaerobic system

Winter training is often considered as the most important part of your preparation for next season. Why not also use your best weapon to improve aerobic performance?

As I mentioned previously in this article, you might choose to prioritize differently. If you spend less energy on optimizing your anaerobic system now, you will be able to build an even stronger aerobic engine. And because of that you can be even stronger later in the season. That is always a question of priority.

Even though my 12-week winter training program forces you to tackle scheduled intervals three times per week and also perform an increasing amount of training, there may still be opportunities to ride more.

Donâ€™t be afraid to add an extra interval or a spontaneous friendly cycling race.

Yet, itâ€™s my gut feeling that many riders donâ€™t prepare optimally for the season opening. And just a little tweak to your current training can make a nice improvement in your opening races.

Thus, I conclude that intelligent riders get an easy advantage in the first few weeks simply by optimizing their training.

PS. I can guarantee these intervals don’t work if you don’t try…